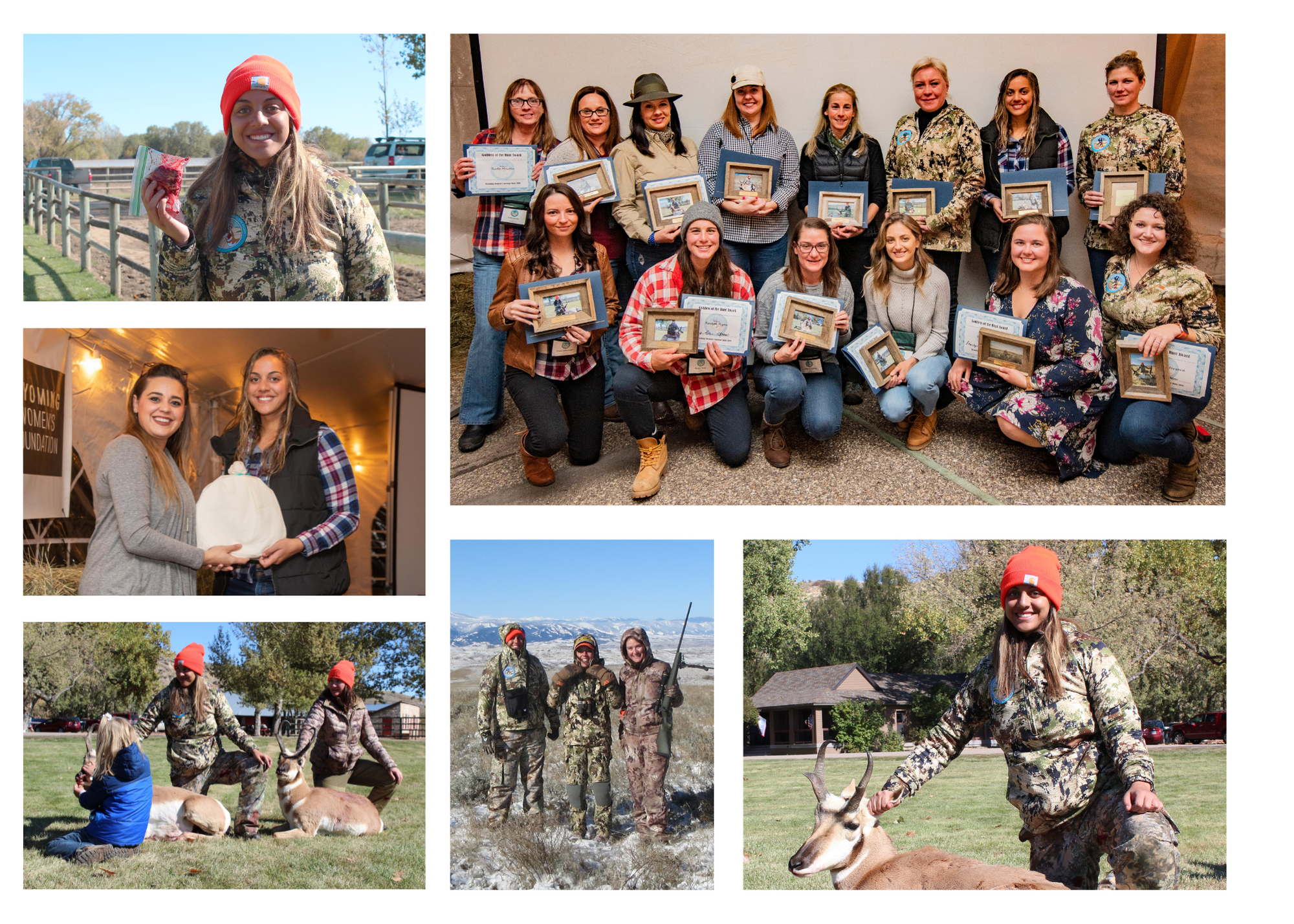 The Wyoming Women’s Antelope Hunt scholarship program is vital to the event’s success. It provides access to those who might otherwise not experience a guided hunt, and offers mentoring in hunting, shooting, outdoor skills, and conservation practices. In 2019, Jaylin Solberg, was selected as a scholarship recipient.

Jaylin is a new hunter who is passionate about researching big game species, connecting to the land around her and mentoring other underrepresented individuals in the profession of natural resources. As an African American woman she feels particularly drawn to encouraging the next generation of women and people of color to get into hunting.

We spoke to Jaylin, now 23 years old and a graduate student at Utah State University, as she looked back on her experience attending the event, reflecting on the memories that continue to inspire her today.

“Growing up, I was in a fishing family. In Minnesota, my grandparents had a lake place, so I would go there every summer and we’d fish. I was never interested in hunting growing up. I was offered when I was little by my grandpa, but I thought “that’s too much, I don’t want to touch a gun.”

In my senior year of high school, I took a zoology class, and that’s when I knew I wanted to do something with wildlife. In 2016, I went to University of North Dakota, and it just became so clear that hunting was a huge part of conservation in wildlife fields. I said to myself, “if I really want to fully embrace the wildlife career field, I’ll need to be able to talk to stakeholders and be able to relate to them.”  So, I wanted to find opportunities to go on hunts.

I didn’t have the resources to do it myself. I didn’t shoot my first gun until my sophomore year of college – I actually did it at my college advisor’s house. She lived out in the middle of nowhere, and she had a shotgun. The first time I shot, I was very fearful. I stood there for probably five minutes because I was so nervous. But once I shot the first pigeon, I was like “this is so much fun.” And, being able to relate it to going out and harvesting my own animal was really intriguing to me. My advisor noticed that, and she reached out to a couple of people to help get me on a mentored hunt. I was able to go on my first mentored hunt, for waterfowl in North Dakota, the next year. That was really eye opening, and a lot of fun. It just blossomed from there.”

When asked what drew her to the Wyoming Women’s Antelope Hunt, Jaylin said:

“Initially, what drew me to it was that it was with women. I get very excited about all-women groups, being a female myself, and being a visible person of color. Having an environment of an all-women’s group felt very secure for me. Also, it was a large mammal hunt. I had only hunted waterfowl prior to this, and I was ready to take the next step.

I didn’t have anything camo, and had shot a gun but still hadn’t owned one. I didn’t have the means, or connections to find out where to hunt on my own. So seeing this opportunity – it was kind just an all-in-one package that I was really excited for. I just thought, “what’s it going to hurt to throw my name into the hat?” Luckily, I got selected.”

What was your first impression, arriving for your first Wyoming Women’s Antelope Hunt?

The annual Wyoming Women’s Antelope Hunt is held at The Ranch at Ucross, located at the Foothills of The Big Horn Mountains.

“The surrounding area was beautiful. Seeing the large groups of animals was very impressive, because in North Dakota, you’ll see a group of five mule deer and that’s it. Seeing 60 all at once, then going a mile and seeing another 20 was breathtaking to me. The property was stunning. I remember rounding the corner, and the cabins and everything was stunning. It was very freeing – the fresh air, the sun being out, beautiful mountains, beautiful scenery…it was a “take it all in and really enjoy being here” moment.”

How was your experience as a new hunter?

Jaylin shared that she was “nervous at first. I remember taking a lot of photos and just being present. My fellow hunter had the opportunity for the first shot, so Friday I was just focused on scouting and helping out, and taking more of a backseat…noticing the scenery more, taking it all in, asking questions. My mentor was so nice, very much “this is your experience, you make it your own.” On my second day, we saw three herds before I was comfortable enough to pull the trigger, and [my guide] was very supportive about it, very “you take your time, make sure that it’s a comfortable shot for you.” The whole thing was very exciting, just a rush to be out there. It was a lot of fun!”

Did any of the other women you met make an impression on you?

“Yes – Danielle, a food blogger for Meat Eater. She prepared a pronghorn heart while we were there, and that was really neat. That’s something I never would have tried on my own, but having her make it made me think “okay, I can try this.” She had actually lived in North Dakota at some point, so sharing our stories about hunting in North Dakota was really fun. Having someone to share the experience with was really nice.”

What will you remember most from the Wyoming Women’s Antelope Hunt ?

I got hired for a job to remove elk, and being able to have that experience [at the Wyoming Women’s Antelope Hunt], helped me get the position and now I’m way more confident harvesting large mammals, and harvesting in general. I’ve gone duck hunting out here in Utah as well. It just helped bring my confidence up as a hunter, as a conservationist, an ecologist, and as a woman in hunting.”

Tell us what happened when you got home?

“I was very excited and very happy that I was lucky enough to be able to harvest something. Most of it went to my family. My family had never had pronghorn before. I processed my pronghorn myself – I felt that was really important for me to do myself, I didn’t want to send it anywhere – and the person that I processed with said, “don’t give away the backstrap, that’s the best part.” I made that with my mom, and it was so good. I also got a mount of my pronghorn, to commemorate the whole experience. It travels with me everywhere, and it’s in my room here at Utah State to commemorate the hard work I had put in and to remind me of the experience. It brings back a lot of memories, when I have it out and I see it.”

Hosted by the Wyoming Women’s Foundation